If you have any queries, please contact
planning@youngsrps.com or Helen Marks on 0191 2610300. 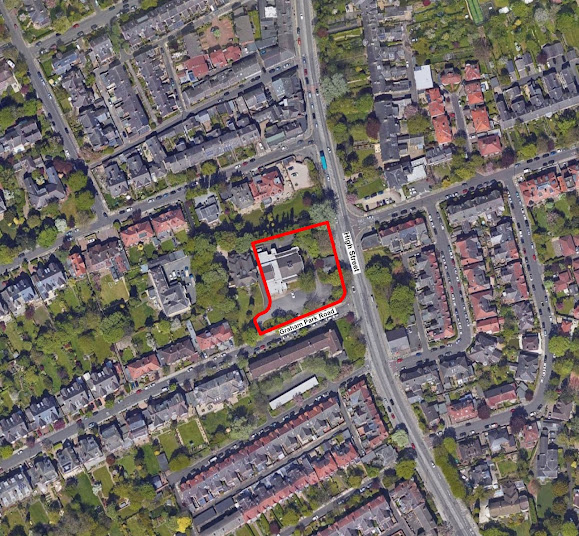 1.  Background to the Development

The Newcastle United Hebrew Congregation (UHC) was established in 1973 and built a Synagogue at Graham Park Road in 1986. A reduction in numbers in the congregation over recent years has seen the UHC determine to sell part of the site while transferring the functions of the Synagogue to the adjacent building, Lionel Jacobson House. A residential scheme was recently proposed by McCarthy & Stone, but the application was later withdrawn and they did not proceed with the land purchase.

LOK Developments Ltd, part of the Morton Group, sees the opportunity for a high-end residential apartment scheme on the site responding to the reported demand for that type
and status of accommodation in this part of Gosforth. A redevelopment to create a return on
site value to the UHC would allow them to proceed with their plans and establishes an
opportunity for LOK to further showcase their ambitions in the residential marketplace and on
sustainability. This opportunity follows the comprehensive transformation of Eagle Star
House at Regent Centre, currently on site , and redevelopment of the former Sanderson Hospital site on Salters Road, both within the same neighbourhood.

The site is in a highly sustainable location, with excellent provision of shops and services on the High Street in easy walking distance and with bus stops and cycle routes at the site frontage providing sustainable transport routes into the city centre.

The character of the new development is to be of contemporary design that reflects the context of the setting, including its Conservation Area status, and responds to the listed post war flats (39-73 Graham Park Road) opposite the site.
The setting of Causey House (non-designated heritage asset), of which the site originally formed part, was largely lost in the early 20th Century when Lionel Jacobson House was built, prior to 1913. The site is now perceived in the Conservation Area as an area enclosed by walls and populated with trees. These key elements will be retained with works to retain the original boundary wall and lodge and the retained tree and landscaping enhancements.

There is, therefore, an opportunity to improve the setting of Lionel Jacobson House with a proposed new building which relates to it better than the existing synagogue and provides breathing space to the building.

Any scheme must also consider the significance of the listed post war apartment building (39-73 Graham Park Road) by complementing their scale and character, possibly mirroring and balancing their position in the urban grain on Graham Park to frame a new view within the Conservation Area. 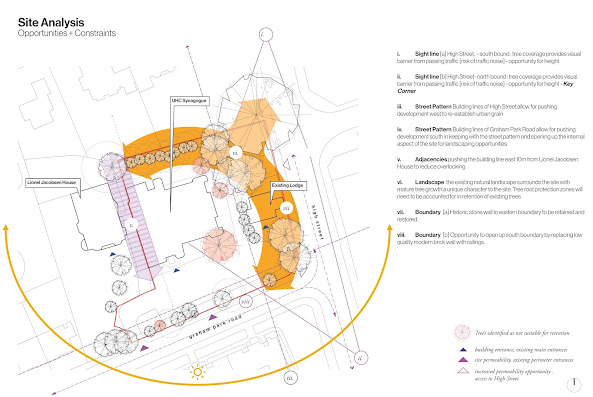 Landscape is a key feature of the site and wider context. Tree cover is an important element of the site, significant in how it is perceived from High Street and Graham Park Road. The well established trees are characteristic of a mature garden setting, while greenery spills over the
boundary and provides relief to views along High Street. The design will maintain tree
coverage to the site boundary and seek to improve and enhance the internal landscape setting around the building.
With the retention and restoration of the historic stone wall to the east boundary, there is an opportunity to open up the southern boundary to Graham Park Road by removing the modern red brick wall in favour of a low level wall and railings, and a further opportunity on the eastern boundary to reinstate a (pedestrian only) gate opening onto High Street next to the lodge.

The predominant scale of surrounding buildings is three storeys. Taking cues from the listed apartment building which is predominantly three storeys but with an end block of four storeys onto the High Street, it is anticipated that the scale of development would be no more than four storeys, with the top storey expressed as part of the roof zone.

The developer and design team are committed to the reduction of operational energy use, embodied carbon and water use for new buildings. To tackle operational energy use, we advocate a fabric first approach, starting with consideration of the building aspect and orientation to make best use of passive environmental design measures. Reductions in embodied carbon will be sought by means of careful material review and selection and optimised structural solutions.

Key to the design will be the quality of housing and outdoor spaces to promote the wellbeing of future residents. The design will seek to create spacious, bright, well ventilated apartments with good outlook and connection to the surrounding landscape, including private open space / balconies where possible. Circulation and landscape spaces will provide opportunity to interact with neighbours and foster a sense of community.  The site presents a real opportunity to contribute to the housing offer in Gosforth.

Based on the design parameters summarised it is considered that the scheme has the potential to deliver up to 24 no. apartments, plus conversion of the lodge building, together with basement parking to maximises the landscaping around the building. 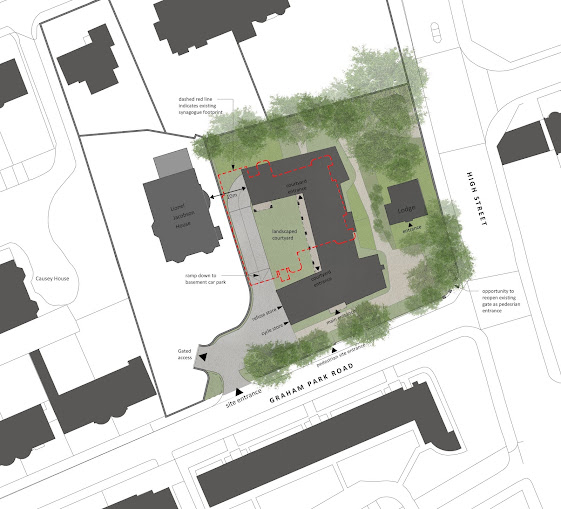 i.    Description of Proposal

Design development to date has resulted in a a four storey C-shaped apartment building, in response to the site context analysis, site constraints and environmental drivers. The building offers a frontage to Graham Park Road, while maintaining the existing tree coverage to boundaries.  A landscaped courtyard opens up the site to the west reducing overlooking to Lionel Jacobson House, creating more visual separation and reinforcing the landscape setting to all sides of the building.

The positioning of the building within the site is also considered to complement that of the listed post war apartment building (39-73 Graham Park Road) opposite, enhancing its setting.

The proposed building form allows the optimising of the orientation of apartments and maximising of passive environmental design measures such as cross ventilation and solar gain. In addition, all apartments have good outook and connection with the surrounding landscape. The form also generates opportunity for articulation of the four storey mass, taking cues from the listed apartment building and houses along Graham Park Road.

The existing vehicular site access point on Graham Park Road will be retained and widened, with the security gate to UHC relocated just inside the entrance as part of UHC’s consented works to Lionel Jacobson House (2018/0838/01/DET).
The existing pedestrian access point on Graham Park Road is to be retained, with the gateway reinstated as part of the works to replace the modern (post 1980) red brick section of wall with a more appropriate low level wall and railings.
It is also proposed to reinstate pedestrian access to the site via the gateway at the corner of Graham Park Road and High Street and in the east boundary next to the lodge.
36no. car parking spaces are proposed to serve the development. It is proposed that the majority of the parking is accommodated in a basement car park accessed via a screened ramp access along the western boundary of the site. A small number of surface car parking spaces would be required within the site, including parking for the Lodge. 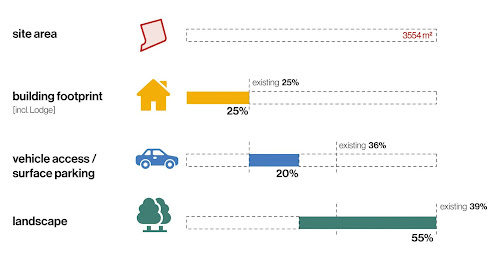 In addition to the poplars along the northern boundary the site is well populated with existing trees, with a woodland copse appearance evident along the east boundary, and a tree belt evident within a grass verge between existing hardstanding and the boundary wall to the south.

It is the intention to retain these existing trees wherever possible as they provide a mature landscape setting to the proposed building and the existing lodge to the east which is to be retained, although it is acknowledges that a small number will require removal due to the proposals, and assessed condition.
The proposed landscape works associated with the development will respond to these existing features, creating gardens and external areas which can be utilised as both private and community spaces – utilising hard and soft landscape surfaces and structures. The landscaping around the east and south perimeter of the site will complement and reinforce the existing trees to be retained and respect defined root protection areas through avoidance or mitigation (no-dig measures).

Facilities required within the external areas such as parking bays for the lodge, hardstanding associated with parking for the main building and service/ maintenance access, bin stores and cycle parking will be integrated into the overall landscape proposals for the site so the functions, uses and aesthetics of the spaces are integrated. Habitat features will also be proposed throughout the site to create additional biodiversity opportunities, using reclaimed materials from site where practicable.

The proposed development will provide 24no. apartments in the main building, plus the lodge as a standalone dwelling. The majority are 2-3 bedroom apartments, designed to exceed the nationally described space standard. All apartments will be dual aspect, with direct access to the landscape gardens or a private balcony. 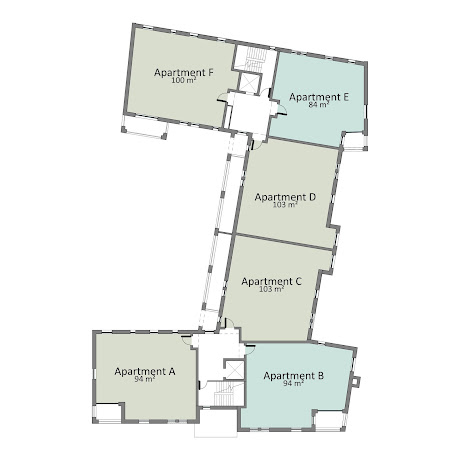 It is envisaged that the building will be constructed predominantly of brick, in keeping with the Gosforth Conservation Area context, making use of brick detailing to create texture and articulation in the facade. 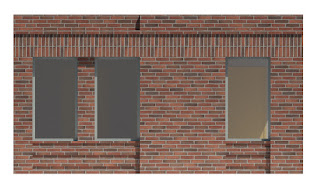 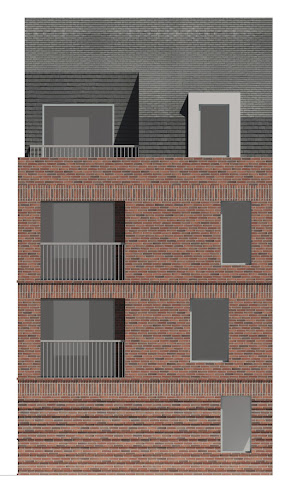 5. Sketch View of the Proposal 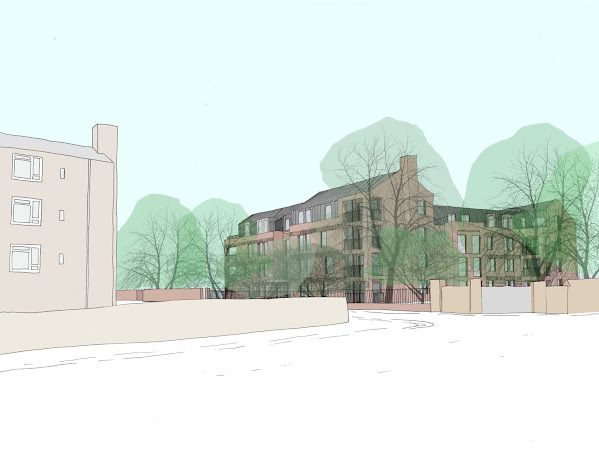